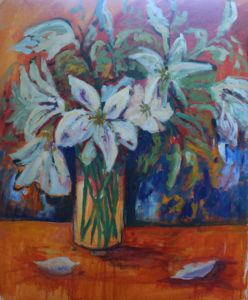 Why are the Easter Lilies called St. Joseph Lilies?

Some images and statues of Joseph show him with a staff which is topped with lilies.

According to the legend the high priest Zacharias was to decide who Mary’s husband would be. Zacharias prayed for guidance and an angel told him to have eligible men bring their walking sticks to the temple and leave them there overnight.

Walking sticks of widowers in Israel were collected and one was to be chosen from among them. The owner of the chosen staff was to marry the young virgin Mary.

In other paintings, saints are pictured bringing vases full of white lilies to Mary and the infant Jesus. St. Joseph is depicted holding a lily-branch in his hand, indicating that his wife Mary was a virgin.

Other saints are also shown with a lily denoting purity, as well. There are statues of St. Anthony of Padua and St. Philomena carrying lilies to denote their innocence.

However, It is believed that the common name St. Joseph’s Lily is in reference to its blooming time which coincides in some areas with St. Joseph’s Day on March 19th.

History, mythology, literature, poetry and the world of art are rife with stories and images that speak of the beauty and majesty of the elegant white flowers. Often called the “white-robed apostles of hope,” lilies were found growing in the Garden of Gethsemane after Christ’s agony.

Tradition has it that the beautiful white lilies sprung up where drops of Christ’s sweat fell to the ground in his final hours of sorrow and deep distress. Churches continue this tradition at Easter time by banking their altars and surrounding their crosses with masses of Easter Lilies, to commemorate the resurrection of Jesus Christ and hope of life everlasting.

The legend is told that when the Virgin Mary’s tomb was visited three days after her burial, it was found empty save for bunches of majestic white lilies. Early writers and artists made the lily the emblem of the Annunciation, the Resurrection of the Virgin: the pure white petals signifying her spotless body and the golden anthers her soul glowing with heavenly light.…

Other legends about the St.Joseph Lily

Since the beginning of time, lilies have played significant roles in allegorical tales concerning the sacrament of motherhood. Roman mythology links it to Juno, the queen of the gods. The story goes that while Juno was nursing her son Hercules, excess milk fell from the sky. Although part of it remained above the earth (thus creating the group of stars known as the Milky Way), the remainder fell to the earth, creating lilies. Another tradition has it that the lily sprang from the repentant tears of Eve as she went forth from Paradise.mark of purity and grace throughout the ages, the regal white lily is a fitting symbol of the greater meaning of Easter. Gracing millions of homes and churches, the flowers embody joy, hope and life. Whether given as a gift or enjoyed in your own home, the Easter Lily, along with other Easter blooms, serves as a beautiful reminder that Easter is a time for rejoicing and celebrating.

Another side of the St. Joseph Lily

During the Victorian era, however, the very conspicuous stamens and pistils were removed because they were seen as overt symbols of sexuality that might move the congregation to impure thoughts.

Hopefully, my paintings of St. Joseph lilies do not stir such impure emotions.