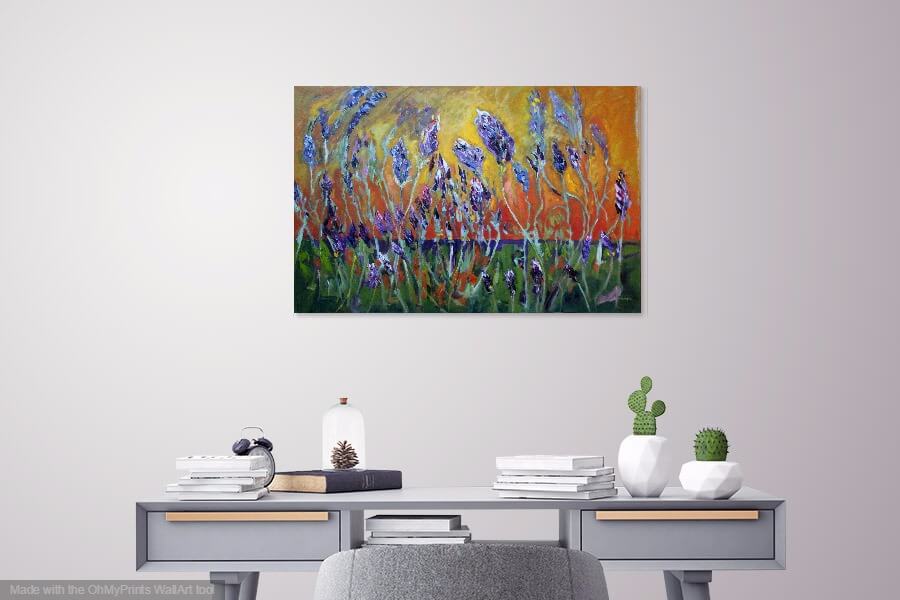 SPRINGTIME INSPIRED ME TO DO TWO LAVENDER AND SEASIDE DAISIES PAINTINGS 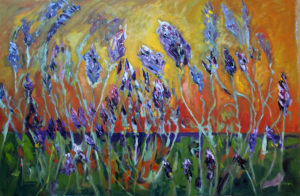 “Lavender Against My Side Wall”. 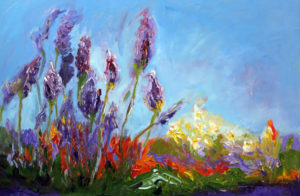 The wall is stained in terracotta orange, creating a beautiful backdrop for these blooms.

The other is “My Lavender And Seaside Daisies”

After visiting Van Gogh’s Exhibition in Melbourne in 2017 I took note of his advice to put a mark down and leave it.

I considered the best way to produce my lavender and seaside daisies paintings was to use my palette knife.

Producing this lavender and seaside daisies paintings has been an enjoyable process.  To achieve the effect I wanted, I applied thick slabs of paint  creating beautiful, rich texture.  It’s not unlike icing a cake.

The origin of Lavender is believed to be from the Mediterranean, Middle East and India. Its history goes back some 2500 years. Lavender is a flowering plant of the mint family known for its beauty, its sweet floral fragrance and its multiple uses.

The ancient Greeks called Lavender nardus, after the Syrian city of Naarda and was commonly called Nard. Lavender was one of the holy herbs used to prepare the Holy Essence and Nard, or ‘spikenard’ is mentioned in the bible in the ‘Song of Solomon’ among other places.

Lavender derives its name from the Latin ‘lavare’ meaning ‘to wash”. The Romans used Lavender to scent their baths, beds, clothes and even hair. They also discovered its medicinal properties.

Today Lavender continues to be cultivated across its countries of origin as well as Europe, Australia, New Zealand, North and South America. Its widespread presence is understandable due to its beautiful flowers, its alluring scent and its extensive uses.

Lavender is grown commercially for extraction of its oil from its flowers and to some degree from its foliage. The oil is obtained through a distillation process.

The oil is used as a disinfectant, an antiseptic, an anti-inflammatory and for aromatherapy. An infusion of Lavender is claimed to soothe and heal insect bites, sunburn and small cuts, burns and inflammatory conditions and even acne. Lavender oils are also used for internal medical conditions, among others indigestion and heartburn.

Lavender oil is said to soothe headaches, migraines and motion sickness when applied to the temples. It is frequently used as an aid to sleep and relaxation.

Dried Lavender flowers are used extensively as fragrant herbal filler inside sachets – to freshen linens, closets and drawers. As an air spray, it is used to freshen in practically any room. Dried lavender flowers have also become popular for use at weddings as decoration, gifts and as confetti for tossing over the newlyweds.

As a member of the mint family, Lavender has been used for centuries in the preparation of food either by itself or as an ingredient of Herbs de Province – an herb combination which captures the flavours of the sunny south of France.

Lavender delivers a floral, slightly sweet and elegant flavour to salads, soups, meat and seafood dishes, desserts, cheeses, baked goods and confectionery. For most cooking applications it is the dried flowers that are used although the leaves may also be used. Only the buds or flowers contain the essential oil of Lavender which is where the scent and flavour are best derived.

Wherever and however Lavender is used in food preparation it extends beyond its familiar fragrance to a rich yet delicate flavour to host of recipes only limited by the imagination.

I hope my lavender and seaside daisies painting does justice to this lovely plant.

This is a low spreading ground cover originally from Central America.

Seaside daisy produces a mass of small open faced daisy type flowers most of the year, particularly during summer.

It  will scramble over rocks or uneven ground.

Although it is a hardy plant, in South Australia, however, it does need to be watered in the summer otherwise it becomes rather withered.

Because it can get a bit straggly, it needs to be tip pruned regularly from a young age. And cut back by half in spring.